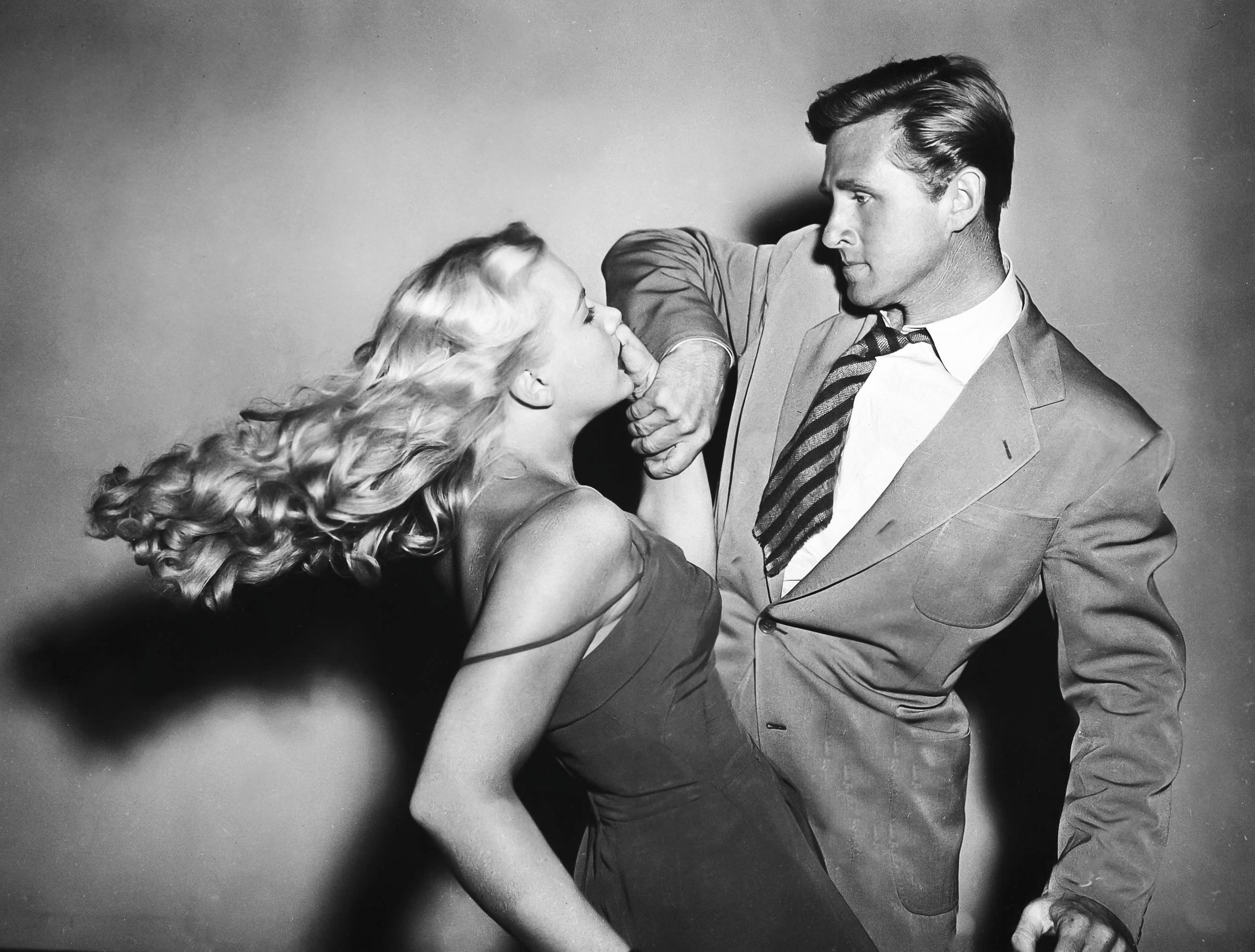 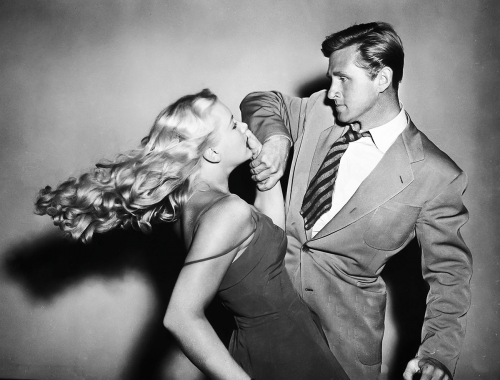 The pleasures of Trapped (1949) are as simple, as short and sharp, as its one-word title. That word says it all: there will be no escape, the tunnel is a dead end, the jaws of the trap are just waiting to spring shut with bone-crunching finality. A model of economy and concision, the film speeds through scenes like a car blowing through stop lights, taking its numerous twists and turns at a whiplashing pace. But it is so stylishly stripped down that at times it offers up a pure, almost abstract beauty. A young woman walks towards the camera along an empty street at night, and as she passes in and out of the street-lights she alternately becomes a flat black silhouette and jumps back into three dimensions. When two men fight in a small hotel room, their shadows flail against the walls like huge moths.

Trapped, which was restored by the Film Noir Foundation and the UCLA Film and Television Archive, belongs to a string of movies about Treasury agents pursuing counterfeiters, including Anthony Mann’s T-Men (1947) and Southside 1-1000 (1950). The message of these stories is that crooks who dare to tamper with America’s sacred greenbacks are the lowest of the low. Mann, with T-Men and other police procedurals like He Walked by Night (1948) and Border Incident (1950), honed a formula: all these films open with documentary scenes that present with fanfare real government officials in real government offices, accompanied by voice-over narration stridently praising our nation’s brave law enforcement agents. Just as you start to feel like a schoolchild in an airless classroom suffering through an educational movie shown on a clunky old projector, the films shift focus to the criminals—and then they get good. Suddenly the settings are underlit and seedy, the characters colorful and menacing. The public servants who thought they were being glorified never seem to have caught on that they were being used as a beard for violent, hard-boiled, and wholly un-improving entertainment.

Director Richard Fleischer certainly got it, though. In Trapped, the opening prologue show us how money is made, from engraving through printing, but it also includes a scene where a bank teller scolds a woman for having taken a counterfeit $20, smugly informing her that she’s out twenty dollars and nothing can be done about it. Already, we’re not on the side of law and order: if this is one of the good guys, show us the bad ones. But Trapped proves interesting in that it never really has any clear protagonist. It looks like Tris Stewart (Lloyd Bridges), a counterfeiter whom the T-men spring from jail in hopes he’ll lead them to his former partners, will be the wily, thuggish anti-hero, but he disappears before the final act. There is an undercover agent (John Hoyt), who hangs around a nightclub making passes at Stewart’s girlfriend, but he’s more convincing as a weaselly gambler and aging wolf than as a heroic T-man. That cops and robbers are alike in their callousness is a theme that recurs in Fleischer’s noir films The Narrow Margin and Armored Car Robbery. In Trapped, counterfeit money is a useful metaphor for the way almost no one is what they seem, and no one can be trusted. Everyone is double crossing or being double crossed, tailing or being tailed, wearing fake identities, testing each other like cashiers peering at a suspicious bill.

Perhaps, if there is a protagonist—in the sense of a character we identify and sympathize with—it is Meg, aka Laurie (Barbara Payton), Tris’s old flame, who is now working as a cigarette girl. It is she who, in that iconic image, walks down a deserted street—its pavement perennially shining with wetness, though we never see a drop of rain fall. Suddenly, a man reaches out from the black mouth of an alley to grab her, and her terror turns on a dime to passionate relief as she recognizes Tris, and they kiss in the shadows. They continue their steamy reunion in her apartment, and when the camera glides away from the couple it might be averting its eyes out of censor-imposed modesty, but then it rests a beat too long on a frilly lampshade, and glides down—dissolving into the basement where two cops are listing to every word from her bugged apartment.

If there is little that is strikingly original in this movie, it is filled with such clever grace notes and off-hand delights: the way the cops in the basement, worn out from long days of surveillance, complain about the ceaseless rumba music Laurie listens to. The boogie-woogie piano playing in the flyblown lobby of a cheap hotel, where vagrants snooze away the afternoon with their battered hats pulled low. Tris goes to this dump to track down his old partner, Hooker (Douglas Spencer), now a pitiful alcoholic, guzzling from a gallon jug of hooch and wearing a tie that looks like it got caught in an electric fan. When Tris finds out his former pal sold their precious counterfeiting plates and lost all the money on the ponies, he starts throttling Hooker, and the violence is that much more upsetting and believable against a backdrop of wrinkled wallpaper, a dust-fogged mirror, crumpled newspapers and an unmade bed. This kind of authentic tawdriness is one advantage of B noir, especially the output of scrappy Poverty Row studios where the cheapness of the productions lends real grit, the kind you feel between your teeth.

B noir also challenges the tendency of film historians to single out certain auteurs and technicians. The cinematographer on Trapped was Guy Roe, a name unlikely to ring many bells (he is, as of this writing, so obscure he doesn’t even merit a Wikipedia page, though he also lensed Mann’s Railroaded! and Fleischer’s Armored Car Robbery), yet many scenes look like they could have been shot by the legendary John Alton. Roe uses the same techniques Alton pioneered to save money and disguise shoddy sets, lighting scenes with a few lamps placed low so that they throw their light upwards, making shadows loom and accentuating the jack-o-lantern leer on Lloyd Bridges’ face. The use of black and white is so graphically bold, some frames look inked in broad brush-strokes. Another side benefit of low-budget filmmaking was the use of real locations; the latter part of Trapped becomes a street-level tour of midcentury Los Angeles, starting on Hollywood Boulevard with a view of Grauman’s Chinese Theatre and ending up in the car barns where a climactic chase leads through, under, over, and around the iconic Red Cars that once trundled across LA.

Many Poverty Row studios went the way of the Red Cars, dismantled ignominiously and leaving their movies to circulate, if at all, in battered, murky public domain copies. Without studio archives, good prints can be hard to locate for restoration. Eagle-Lion, the producer of Trapped, was one of the more respected of the minor studios, founded by producer J. Arthur Rank to distribute British films in the U.S., and going into stateside production in 1947 after acquiring PRC, the poorest of the Poverty Row studios. Flourishing briefly in the late forties, Eagle-Lion produced Anthony Mann’s influential early noirs and other gems including Repeat Performance, Ruthless, The Amazing Mr. X, and The Scar. When the Film Noir Foundation set out to restore Trapped, they were able to hunt down a 35mm print that a private collector had deposited with the Harvard Film Archive, and which was restored by the UCLA Film and Television Archive to pristine luster.

The Film Noir Foundation does not merely restore films in the technical sense of producing new, cleaned-up prints; it restores to the canon overlooked, forgotten, and off-beat movies that bring their own distinctive and pungent flavors of noir. Joseph Losey’s scathing and haunting The Prowler (1951); Robert Parrish’s Cry Danger (1951), with its abraded atmosphere and deadpan humor; Norman Foster’s Woman on the Run (1950), a subtle and mature marital drama wrapped up in a location-shot manhunt; Cy Endfield’s searing, traumatic lynch-mob exposé Try and Get Me! (1950). This last features perhaps the finest hour of Lloyd Bridges, as a preening, psychotic small-time crook turned kidnapper; but he flexes these same mean-eyed, gum-chomping, charismatic-heel muscles in Trapped. There is an unmistakable sizzle in his scenes with Barbara Payton, the white heat of their mutual blondness taking over the screen. This was Payton’s first major role, and she would never get a better one; there is vulnerability and neediness that sets her apart from hard-boiled bombshells like Adele Jergens, but she can still put across a line like, “You don’t make that kind of dough sellin’ bibles,” and brush off a persistent guy with aplomb and a lift of one scimitar eyebrow: “You can hope, just like anyone else…I guess.” 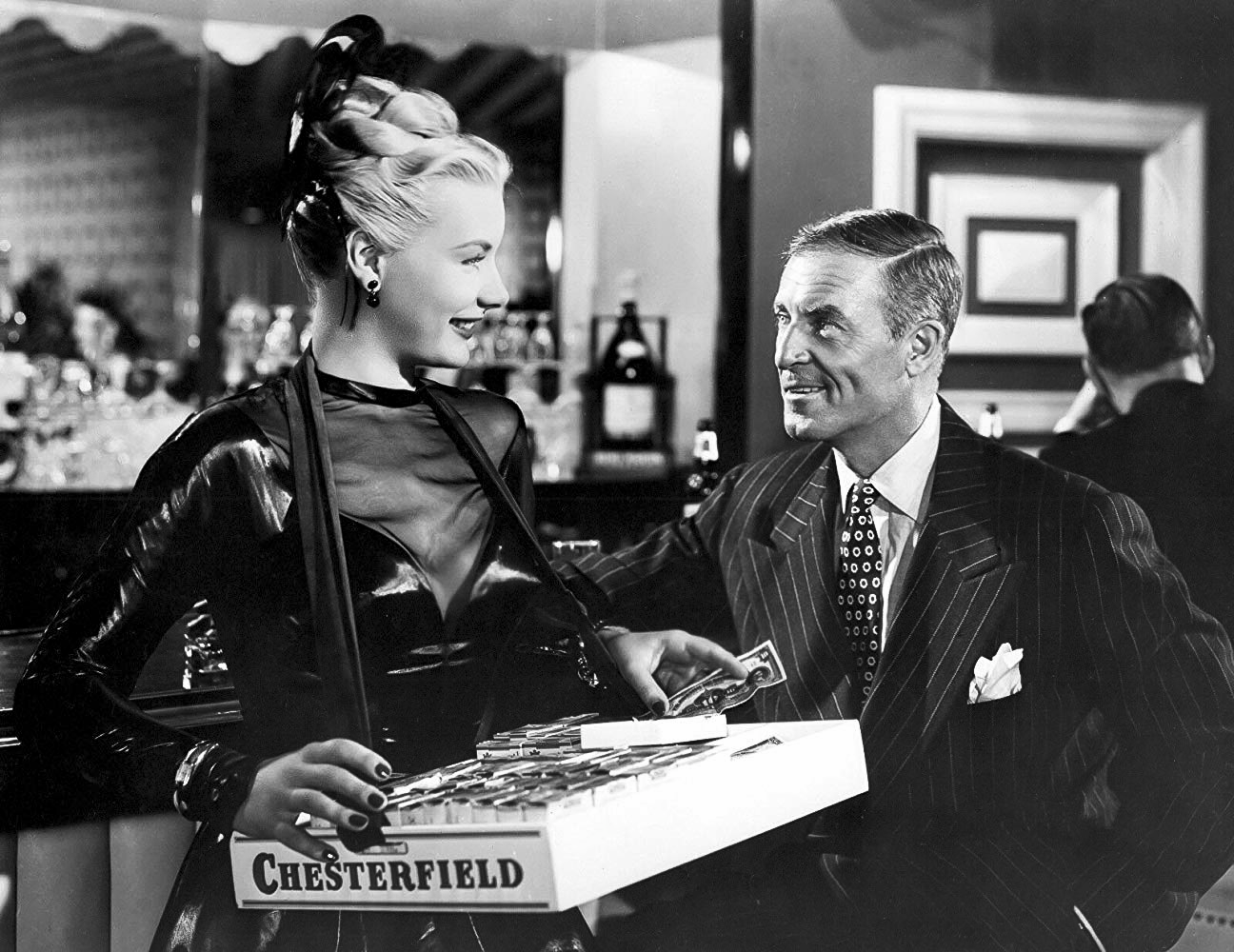 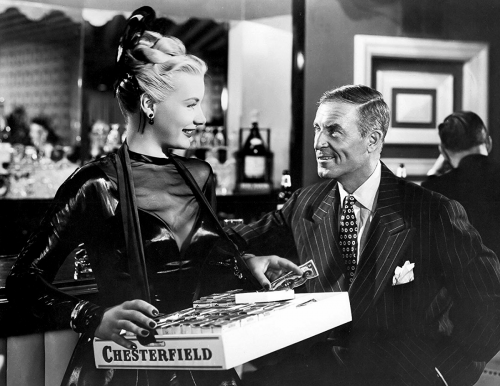 Payton is best known for having a life more noir than anything she put on screen. She hooked up with Tom Neal, who starred as fate’s punching bag in Detour (1945) and seemingly spent the rest of his life in the role. The scandal when a jealous Neal broke the jaw of Payton’s then-husband Franchot Tone hurt her career, and she soon descended into a sordid mire of booze, drugs, bad checks, and prostitution, so broke at times that she slept on bus-stop benches. Told that alcohol was endangering her life, she retorted, “I’d rather drink and die;” she was only thirty-nine when her liver gave up the fight.  In Trapped she is still twenty-one, shiny as a new penny, but already at home in the darkness of a blind alley.

Imogen Sara Smith is the author of In Lonely Places: Film Noir Beyond the City and Buster Keaton: the Persistence of Comedy. Her work appears in Film Comment, the Criterion Collection, Sight & Sound, and many other publications.