This September 17 marks the 100-year anniversary of the premiere of THE LUMBERJACK. The oldest surviving film made in Wisconsin, THE LUMBERJACK was produced by a group of itinerant filmmakers who traveled from town to town making “local talent” pictures. Seventy years later, the making of this local film became the subject of the documentary WHEN YOU WORE A TULIP AND I WORE A BIG RED ROSE. Both films are now included in the WE’RE IN THE MOVIES: PALACE OF SILENTS & ITINERANT FILMMAKING Blu-ray/DVD collection. In celebration of THE LUMBERJACK‘s milestone anniversary, we’re taking a look at the only known contemporary reviews of the film, courtesy of WHEN YOU WORE A TULIP‘s director, Stephen Schaller.

THE LUMBERJACK was previewed for the film’s cast on Wednesday morning, September 16, 1914. The public premiere was the following evening, September 17, 1914. As indicated in the half-page ad above, THE LUMBERJACK was paired with “the big two reel biograph” THE HONOR OF THE LAW. Although the biograph now appears in the Internet Movie Database (IMDB), Schaller’s years-long search for a mention of the film in reference work has not yielded any results and it is unclear whether a copy survives. 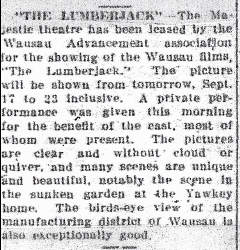 “The review of the opening night events appeared in the following day’s newspaper under the headline ‘Amusements.’ It’s reported that ‘great appreciation of the acting of the cast was shown by the enthusiasm of the audience’ and ‘Mr. and Mrs. H. J. Hagge as the principals were heartily encored.’ The Rothschild Park bridge railing collapse is described as a ‘thriller which was not anticipated when the picture was arranged.’ However, the death of Paragon Film’s executive, Edward Rosenthal, is not mentioned.

You can watch THE LUMBERJACK and WHEN YOU WORE A TULIP AND I WORE A BIG RED ROSE in WE’RE IN THE MOVIES: PALACE OF SILENTS & ITINERANT FILMMAKING, now available on Blu-ray/DVD.