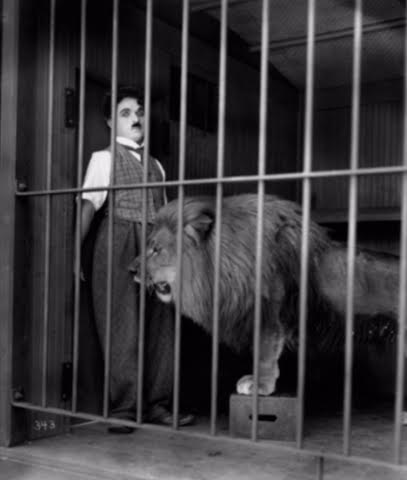 One of the more memorable scenes in Chaplin’s 1928 classic The Circus occurs when the Tramp, chased by a mule, accidentally locks himself in a lion’s cage. Chaplin’s co-star in this scene was “Numa,” a famous screen lion who had already appeared in several other films, including The Extra Girl with Mabel Normand and The Missing Link with Charlie’s half-brother Syd Chaplin.

Numa, named after a lion in the Tarzan books, was a resident of Gay’s Lion Farm in El Monte, CA. The farm was operated from 1919 to 1942 by former circus performers Charles and Muriel Gay. (Another famous resident of the farm was “Slats,” the original MGM logo lion.) Mr. Gay trained his animals not only to do tricks but also to obey commands and express annoyance or rage. Evidently Numa was one of his best trained and most trusted lions.

Numa in a postcard for Gay’s Lion Farm

No human being is totally safe with a lion so Charles Gay made sure that actors understood that his lions were not completely tame. There was always a certain amount of risk involved when working with a wild animal. Even so, actors wore no protection. In fact, during the lion cage sequence, Chaplin wore a leather legging under his pants to protect himself from a dog who bites at his leg, but nothing to protect himself from Numa. Mr. Gay later remembered the big responsibility he felt when protecting the “King of Comedy” from his lion:

“There I stood while Numa put his nose in the stomach of the world’s greatest comedian. It was a terrific responsibility. Here was a man worth ten million dollars. Suppose Numa had decided to become disagreeable. Not all the Chaplin millions could have saved him.”1

Gay also recalled how Chaplin once practiced a dangerous stunt with a young lion on his farm, a stunt that even he himself would never have dared to attempt. In this sequence the lion was supposed to sidle up to Chaplin and paw at his stomach. Chaplin simply lied down and let the lion do it. Gay said that even if he were as wealthy as Chaplin, nothing could have induced him to let that lion paw his stomach. “Chaplin may not be a big man,” he said, “but he is either a very brave one… or a foolish one.”2 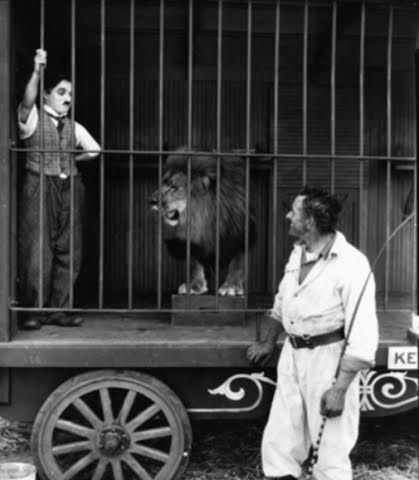 During the filming of The Circus, Director Chaplin occasionally had difficulty getting Numa to cooperate. In one scene he wanted the lion to lie down in the cage and pretend to be sleeping. However, Numa did not want to sleep as it was not his nap time. Gay was able to make the animal lie down and stretch out but it refused to stay in that position. “Wait a minute,” Chaplin said, “I have an idea… Now all you fellows be still.” He then seated himself at an organ that was just off-camera and proceeded to play a weird, low piece of music suggestive of India or the jungle. Numa soon settled down and Chaplin quickly (and quietly) re-entered the cage and managed to finish the scene as planned.3 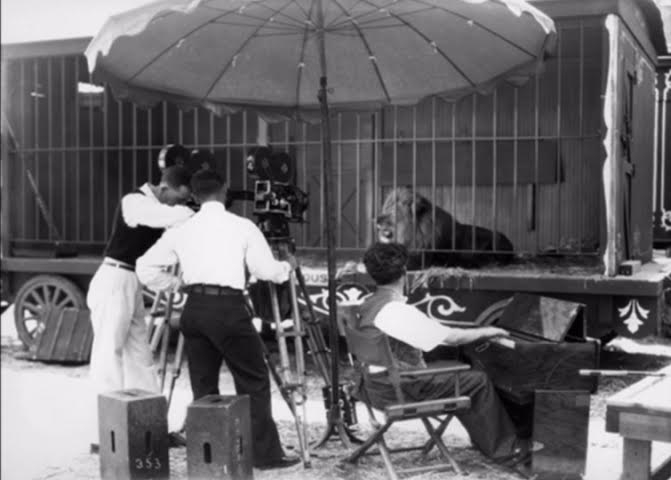 Then the lion was removed so Chaplin could practice in the cage with himself portraying the lion and Harry Crocker (who played Rex, the tightrope walker, in the film) standing in for Chaplin as the Tramp. British journalist L’Estrange Fawcett, who was actually present on the set that very day, described the action:

Every movement has to be worked out in angles and inches. The lion’s jump and Chaplin’s jump must be calculated exactly, for we cannot afford to lose the world’s greatest comedian. There is a moment’s respite, while calculations are made. Suddenly a shout from the cage, “Look, I’ll show you what we want,” and Chaplin is lying on the floor of the cage imitating the lion. He hunches his back, grunts, roars, moves restlessly round on all fours, rolls over in the dust, and rubs his body artfully against the bars, growling and baring his teeth. Crocker “plays” him with a boathook and a whip, but the “lion” is in no mood for being prodded, and lashes out at the “trainer,” putting him to flight through the door.

Over the bold legend across the bottom of the cage–“Keep Away, Dangerous”–Chaplin stands in characteristic pose, arms through the bars and folded, weight on one foot, the other leg crossed over and resting on the point of a disreputable boot, his compelling smile spread over his face. “Come on,” says the lion; “I’ve got a new idea. Couldn’t we…”

The next pause found Chaplin reciting “To be or not to be, that is the question,” in devilish mockery of John Barrymore, and then burlesquing himself in his own part in The Circus. He knows a good deal more Shakespeare than he is given credit for. Now he has some comic bit to do himself. He shakes himself, takes a turn up and down the cage, and says to the camera-man, “Wait a moment till I get funny.” Then he returns glowing with smiles. “Now let’s really mean it this time–steady; camera,” and the handle turns. The scene is shot. “That’s going to be good,” says the protagonist.4

Later on the whole business was repeated, this time with Mr. Chaplin and the lion in the cage. The trainer assures us it is quite safe, but I don’t believe Mr. Chaplin enjoyed the experience very much. None of the spectators did. Everyone sighed with relief when he came out safe and sound. After all, one doesn’t let a lion breathe on one for fun, and Chaplin declared the lion’s breath was hot!5

Jessica Buxton is a Charlie Chaplin aficionado and researcher from Paris, KY. Her site, Discovering Chaplin, is devoted not only to Chaplin’s long and unique film career but to his fascinating life offscreen as well. Comprised of off-the-beaten path stories and photos, this site will hopefully help fans discover something new and interesting about cinema’s first genius.

You can see Charlie Chaplin develop his ‘Little Tramp’ character in CHAPLIN’S MUTUAL COMEDIES and see Mabel Normand act with Numa in THE EXTRA GIRL, part of THE MACK SENNETT COLLECTION, VOL. ONE.