Flicker Alley is proud to present the following essay by Vince Keenan, written for Detectives and Dames: A Flicker Alley Noir Blog-a-Thon! Too Late for Tears (1949) is available on Blu-ray/DVD May 10! Pre-order today!

Vince Keenan is the managing editor of Noir City, the magazine of the Film Noir Foundation. His new novel Design for Dying, co-written with his wife Rosemarie Keenan under the pen name Renee Patrick, was called “a champagne-flavored frolic of a first mystery … sure to delight fans of old Hollywood and Turner Classic Movies” by Library Journal. 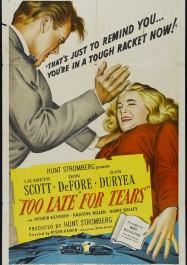 You know the work of Roy Huggins, even if you’ve never heard his name. Huggins, who wrote both the screenplay for the newly-restored Too Late for Tears (1949) and the serial on which it was based, is one of the stealth giants of 20th-century pop culture, leaving his fingerprints everywhere. He’s the Stan Lee of network television.

He began as a novelist, debuting with a 1946 novel called The Double Take that aped Raymond Chandler so shamelessly Chandler himself admired it. The book was filmed two years later as I Love Trouble, with Franchot Tone as wisecracking shamus Stuart Bailey. It boasts gorgeous dames a’plenty, noir favorites like Raymond Burr and Steven Geray, and a corkscrew plot that, as in many a Chandler yarn, ultimately proves irrelevant. Huggins adapted the book himself, quickly realizing Hollywood was where a writer could take down the big money. He’d script several other underrated noir titles. 1954’s taut Pushover gives the lie to the belief that Fred MacMurray never strayed to the dark side of the street again after Double Indemnity. Ida Lupino is menaced by her new husband who’s only interested in the family mill in Woman in Hiding (1950), which dutifully follows Chekhov’s dictum that if a hydroelectric turbine is mentioned in Act One, it must be turned on in Act Two.

It was in television, though, that Huggins would truly leave his mark. Among the series he created are several with outsized footprints. Maverick and The Fugitive were both rebooted for the small and big screens, while a feature film based on his jazzy Los Angeles private eye show 77 Sunset Strip has been in development for years. Sunset’s lead detective? None other than The Double Take’s Stuart Bailey, given new life. Crime novelist Max Allan Collins, long a Huggins admirer, observed that The Double Take is “undoubtedly the most filmed private eye novel ever.” Huggins recycled its plot on many of the series he worked on, even transposing the action to the Old West for Maverick. When you’re as prolific as Huggins was, you’re not going to get too precious about reusing a story that works.

Huggins’ name came to mean something else inside Hollywood’s corridors of power. He’d gotten shafted on a number of shows he created, the most legendary example a story that sounds like something out of Hail, Caesar!. Studio chief Jack Warner arranged for the pilot episode of 77 Sunset Strip to be released theatrically in the Caribbean, a dodge enabling the studio to claim the series was based on a movie and not Huggins’ original Stuart Bailey stories. Fed up, Huggins had ownership of all the concepts he created written into his contracts, a practice other producers soon followed.

What cements Roy Huggins’ Hall of Fame status is his work as a mentor, with one writer in particular. TV titan Stephen J. Cannell (The A-Team, Wiseguy, 21 Jump Street) called Huggins “my Godfather in this business,” saying “during the two-and-a-half years I sat in his office, or in screening rooms, or at lunch discussing script problems with him, I learned more about the process of writing and producing television than I have in the entire twenty years since … He was the one who showed me how to do it. He was the one who taught me how to fix a bad piece of film or plot a script so each scene is more interesting than the one that came before it.” Together, Cannell and Huggins co-created the perennial The Rockford Files, re-teaming Huggins with Maverick star James Garner. Many of today’s top television auteurs came through Cannell’s system, filtering Huggins’s storytelling lessons through to an entirely new generation. 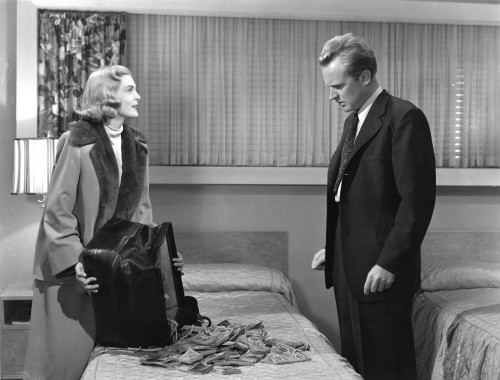 Too Late for Tears is easily Huggins’ greatest achievement in his relatively brief movie career. His casually diabolical script prefigures A Simple Plan as young L.A. marrieds Lizabeth Scott and Arthur Kennedy accidentally come into possession of a hefty extortion payoff. As Scott’s avaricious tendencies get the better of her, the blackmailer (Dan Duryea) comes calling. It’s unquestionably Liz Scott’s finest hour, but good luck taking your eyes off Duryea, who saunters onto the screen all rancid insouciance and ends up timid and broken before La Scott.

The surprise, then, is that Huggins didn’t care for the finished film. He even assumed some of the blame himself. “I hated the movie (producer Hunt Stromberg) made from my script,” he said. “It was intended to be a suspense movie … It was a bad movie because it was badly directed – and possibly badly written, but in view of the lethargic direction, how could you tell?”

Rapturous reactions to the Film Noir Foundation’s restored version indicates that on this score, Huggins was wrong. But he can be forgiven, considering he got so much else right.