Flicker Alley is proud to present the following essay by Nora Fiore.

As “The Nitrate Diva,” Nora Fiore celebrates classic cinema on her blog, Twitter, and Tumblr.

Note: This essay contains spoilers about the plot of Children of Divorce.

“Children of Divorce urges us to remember a different Clara Bow—a great actress and an eloquent interpreter of Jazz Age tragedy.”

Kitty’s large, dark eyes are glistening with tears, glistening with a shine to match the sequins on her party dress. She has just told the man she loves that she cannot marry him. And now she must make her next move: ensnare a man she does not love. She opens a silver compact. Under the mask of her pale makeup with its dark painted-on lips, we can see the lines of her mouth tighten in determination. With short, expert swipes, she dabs at her cheeks and wipes away the tears. The viewer can recognize the movements of a young woman adept at concealing sorrow, far more familiar with pain and the hiding of it than we like to think a young woman should be.

This small moment is far from the most poignant in Children of Divorce, yet it testifies to Clara Bow’s subtle, heartbreaking talent. She loads every gesture with a lifetime of emotion. Today Bow endures as a icon largely due to her status as the original “It Girl,” a symbol of carefree Roaring Twenties sex appeal. Newly restored and soon-to-be released on Blu-ray/DVD, Children of Divorce urges us to remember a different Clara Bow—a great actress and an eloquent interpreter of Jazz Age tragedy.

Fresh from her career-defining success in It (1927), Clara Bow expresses the dark side of the flapper’s desire and desirability in Children of Divorce. Clarence Badger’s It exalts the flapper’s sex appeal. Shopgirl Betty Lou users the power of “It” to override social conventions and snag the wealthy man of her dreams. By contrast, Children of Divorce dwells on the destruction of a high-society flapper. Vivacious Kitty Flanders, pressured by her mother to marry a rich man, seduces her best friend’s fiancé, Ted, and coerces him into drunken wedding vows. The misjudged union traps Kitty in an opulent but loveless existence as a wife and mother. Instead of bringing about a happy ending, Kitty’s sex appeal, exploited and corrupted, cuts her off from her most meaningful relationships and leads to her downfall.

Children of Divorce contrasts significantly with another key movie in the flapper canon: Harry Beaumont’s Our Dancing Daughters (1928). As played by Joan Crawford, Charleston-dancing Diana represents integrity, whereas her gold-digging false friend Annie hides her greed behind a pretense of old-fashioned modesty. Diana’s refusal to conform or pander wins her man in the end. However, by depicting its doomed gold-digger as a wild girl in the jazz-baby mold, Children of Divorce shows the flapper’s precarious position in a society that manipulates her and limits her freedom.

Whereas Annie in Our Dancing Daughters comes across as a hissable hypocrite, Clara Bow crafts her fundamentally similar character into a tragic figure. Her vitality, her range of emotion, the rhythm of her movements, weave a bond between her and the viewer. When we see Kitty jauntily handing out cocktails to friends or shimmying in front of a dance band, her contagious energy leads us to root for her happiness. 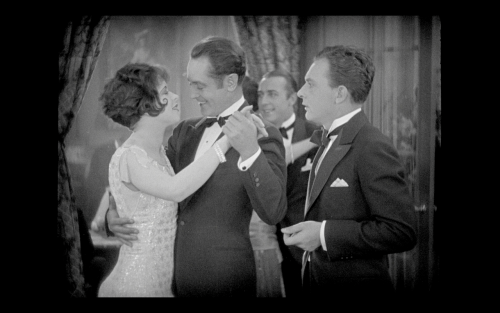 Clara Bow and Einar Hanson dance in Children of Divorce (1927).

Bow had a gift for seizing the intimacy of the film medium, whether in close-up or long shot. For instance, when the man Kitty loves, a penniless aristocrat, cuts in to dance with her, her bubbly laughter in the arms of another man slowly melts into a more bashful smile. She occupies a small portion of the frame, yet the eye travels towards her blossoming succession of reactions: merriment, surprise, sheepishness, then quiet joy. Bow draws the viewer into her character’s experience, rendering Kitty’s fate all the more painful.

Children of Divorce deepens our sympathy for the characters, particularly for Kitty, by showing their lonely childhoods. In the film’s prologue, Kitty Flanders and Jean Waddington grow up together in a prison-like boarding school where both were abandoned by their divorced parents. The film recurrently makes the connection between past and present, cutting to shots of Kitty and Jean as children that parallel the events unfolding between them as grown women. Although Kitty acts unscrupulously, tricking Ted into marriage and betraying Jean, the audience cannot completely fault her. We know what she’s been through. The intertitles also call out the cause-and-effect relationship between irresponsible parents and unhappy children. When Ted threatens, “I’ll get a divorce!” Kitty responds, “Well, I’ve been taught to change husbands—but not that fast!” This exchange confirms that Kitty is reaping a legacy of carelessness.sown by her manipulative mother. The resurgence of the past in the midst of the present reminds us not to judge Kitty too harshly.

“Out of context, the almost ecstatic shot would signal healthy sexual fulfillment.”

Kitty’s irrepressible sexuality, crushed by bad influences and decisions, pulls the spectator into her personal tragedy. In the scene where Ted discovers that he has married Kitty, he wakes up with a splitting headache only to find her in his bed. She rolls over to face the camera, drowsily smiling and stretching. Out of context, the almost ecstatic shot would signal healthy sexual fulfillment. But the audience knows that both Kitty and Ted love other people and will face serious consequences for their actions. Despite the touted permissiveness of the 1920s, conservative, mercenary social codes put Kitty on a collision course with disillusionment. The memorable, sensual image of her smile acquires a bitter irony; it primes us to associate a woman’s satisfaction with confusion, dismay, and foreboding.

Indeed, the radiant shot of Kitty in bed offers the film’s last dazzling flash of her vitality. For the rest of Children of Divorce, the audience sees an angry, disappointed woman in place of the exuberant debutante we knew. Instead of lighting up with desire, she glows with regret like a dying ember. Instead of bouncing around the screen space as before, she often appears seated or stationary. When her friend Jean comes to visit and hugs Kitty’s child, Kitty wears an expression of sadness, not pride, as though she feels like a stranger in her own life. Kitty’s transformation, as interpreted by Bow, conveys the Roaring Twenties’ broken promise of pleasure and prosperity.

Children of Divorce is a flawed film. Like the characters who inhabit it, the movie bears the marks of a troubled upbringing. It ran through two directors. Josef von Sternberg and the cast worked the night shift to retake scenes originally helmed by Frank Lloyd. It swapped out two leading men. Gary Cooper was fired, briefly replaced, then rehired. Four writers worked to adapt Owen Johnson’s novel into a scenario and titles. Despite the uneven script and the varying visual creativity of the film, Clara Bow’s performance gives Children of Divorce a sense of continuity through her character’s arc. As von Sternberg said, “If Clara Bow ever makes the picture she can make, then you will see how great screen acting can be.”[1] 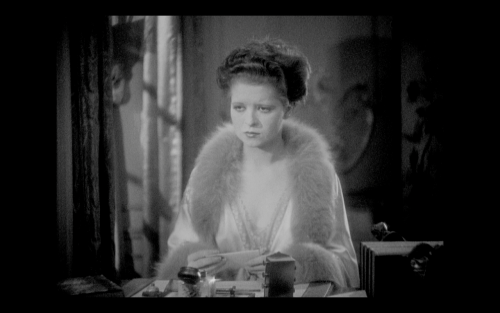 “In the most artful sequence of Children of Divorce, one that suggests von Sternberg’s flair for glittering melancholy, Kitty writes to Jean expressing her remorse.”

In the most artful sequence of Children of Divorce, one that suggests von Sternberg’s flair for glittering melancholy, Kitty writes to Jean expressing her remorse. She realizes that a divorce would not give her the freedom or happiness she craves, since the man she loves cannot marry her. Bejewelled but miserable, Kitty sits at a luxurious desk in a gilded apartment and wears a resplendent negligee. She finishes and seals her letter. She rises. In a long shot of the room, the camera moves backwards, giving the impression of a suddenly deepening space, as though doom were stretching out before Kitty. She walks out through the first in a series of doors. The slowness of her movements—a world away from her flitting lightness in earlier scenes—conveys Kitty’s despair, a mournful march for a dancing daughter.

When I saw this scene at Capitolfest, it left me and my fellow attendees spellbound. I could feel an electric current of awe running through the audience. We sat bonded by the harmony of von Sternberg’s direction, James Wong Howe’s camerawork, and Bow’s performance. Even the contrivances of the plot fail to tarnish the scene. Bow could not be further from her “It Girl” image here. Far from embodying a passion for life, she looks exhausted, drained of hope. A young face with eyes like eternity. 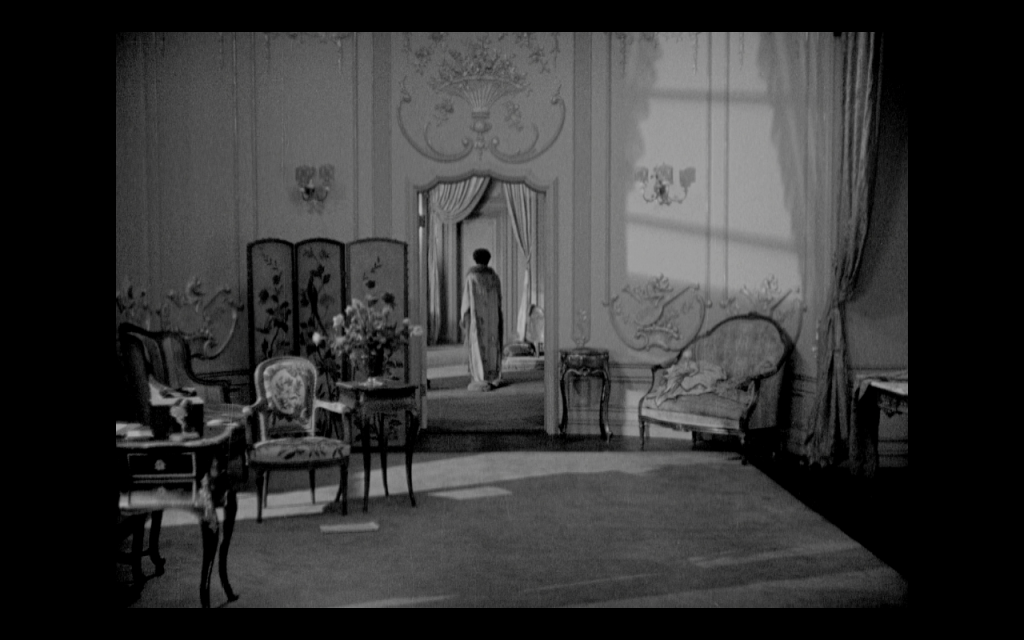 “When I saw this scene at Capitolfest, it left me and my fellow attendees spellbound.”

In Children of Divorce, Kitty wrestles with a legacy of neglect. She tries to beat society at its own arbitrary game, to grasp happiness by deceit. She loses. Wounded by a lonely childhood and misguided by her mother, Kitty comes to recognize her youthful freedom for what it was: a chimera. Just as the collective trauma of WWI gave rise to the anything-goes culture of the 1920s, Kitty’s traumatic childhood cultivated her fatal combination of wildness, cynicism, and naïveté. In contrast to her upbeat, triumphant flapper in It, Bow proved herself a great dramatic actress with the haunted flapper she creates in Children of Divorce. Through her character’s downward spiral, Bow captured the Jazz Age tragedy so beautifully articulated by an admirer of hers, F. Scott Fitzgerald: “So we beat on, boats against the current, borne back ceaselessly into the past.”