When filming L’Inhumaine (1924), director Marcel L’Herbier endeavored to assemble an artistic team of visual and plastic vanguards. Who better then to provide sculptures for this cutting-edge production than avant-garde artist and pioneer of modern sculpture, Joseph Csaky? Born in Hungary in the late 1800s, Csaky became a naturalized French citizen in 1922. He is best known for being one of the first sculptors in Paris to apply the principles of pictorial Cubism to his art. 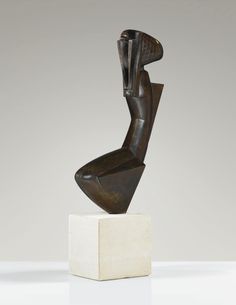 Csaky completed ‘Femme Accroupie’ in January 1923; the sculpture, pictured below, is one of L’Inhumaine’s many remarkable objects on set.

You can see Joseph Csaky’s ‘Femme Accroupie’ without having to spend $400K when you watch L’Inhumaine, premiering on Blu-ray February 23, 2016. In fact, get 25% OFF MSRP when you pre-order the Blu-ray today!