WE’RE IN THE MOVIES: PALACE OF SILENTS & ITINERANT FILMMAKING showcases local filmmakers’ passion for cinema. One of these local filmmakers is Melton Barker, who spent five decades travelling the country shooting the same script, THE KIDNAPPERS FOIL, with an ever-changing cast of local children. A 1937 version of THE KIDNAPPERS FOIL from Corsicana, TX is included in the WE’RE IN THE MOVIES bonus features. Dr. Caroline Frick of the Texas Archive of the Moving Image was kind enough to sit down with us to shed light on the preservation challenges itinerant films pose, what motivated Melton Barker, and how this mode of filmmaking is still relevant today.

Thanks so much for agreeing to this interview. In addition to your work as a professor and author, you are the founder and director of the Texas Archive of the Moving Image. Can you tell us a little more about your organization’s work with film preservation and itinerant film?

My background is within the moving image preservation community, and I worked at a number of places in the U.S. that are focused on national collections, like the Library of Congress. When I came to Texas, I was really surprised that with so much of a rich production history like the state has, there really wasn’t an entity that was trying rescue moving images related to the state. We’ve estimated that nearly 90% of American film made before 1930 no longer exists – that’s when you’re talking about Hollywood films. When you start looking at the real breadth of film at large, the statistics of what’s lost are much higher.

I started the Texas Archive of the Moving Image to really get out this message that your home movies, your businesses commercials, your industrial films, your educational films – in addition to Hollywood films about Texas – are really important. In 2007 we started the Texas Film Round-Up. We bring a trailer to libraries and other locations and people will bring out their films. We’ve been able to digitize over 20,000 films and put them online at www.texasarchive.org.

With itinerant films, this became a true passion of mine because one of the most prolific itinerant filmmakers was Melton Barker, who was a Texan. As I started doing a lot of research on the history of Texas filmmaking, Melton Barker became a significant player and a total curiosity. A significant player because he ostensibly was connected to the Dallas film community, which is one of the largest communities here in the state of Texas. And although he made hundreds and hundreds of films [across the country], the vast majority were in Texas. He is definitely my favorite Texan because I have spent a good portion of my life tracking Melton Barker.

He’s hard to track down now, isn’t he? How hard is it to find his work?

In terms of the films themselves, it’s again going back to that really shocking statistic of how few films are left. Take the statistic from say the silent era films, apply that to Melton Barker, and it’s even more significant. The prints that are still left are very special indeed.

The most mysterious are the two prints [of THE KIDNAPPERS FOIL] that were screened in the 1980s in Waco, TX. No one knows where they are now. So it is a very elusive craft.

In terms of tracking his career and piecing that together, when I first saw a Melton Barker film, I had worked for Warner Brothers and had done a lot of work with children’s short subjects [like Hal Roach’s OUR GANG films]. I was fascinated with the Melton Barker film [THE KIDNAPPERS FOIL] because it was a copy of the children’s short subject. But I thought it was a one-off. But then when I started doing research through local papers and filmmakers, it was like a light bulb going off – that wait a minute, he did this all over the place! 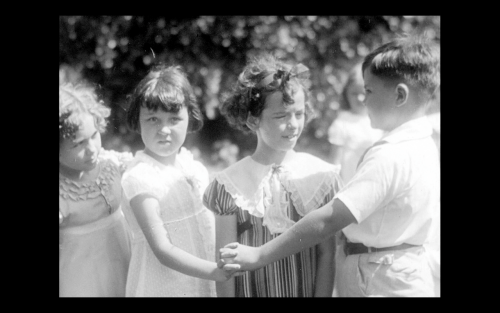 What I never would have guessed when I had that “aha moment” is that he did hundreds of them, and in particular the length of his career; he did this from the 1930s through his death in the 70s. The fact that he did the same film over and over for decades, I find phenomenal.

It’s really with internet technology and today’s local newspapers being digitized that we’re able to discover it. Itinerant film is really evolving as local newspapers are making more and more resources available and searchable. Before, everything would have been on microfiche.

In essence, what [Flicker Alley] is showcasing is the phenomenon of this see-yourself-on-the-screen film. But when those films are left behind in those local communities, those memories haven’t necessarily been passed on. So you might have an archivist, like the one we met in Nebraska, who had a copy of KIDNAPPERS, but he thought it was a local thing that a Nebraskan filmmaker had done. It wasn’t until a colleague and I told him it was the same thing that we have in Texas and Waco and rural Pennsylvania that he realized what he had.

I’ve thought a lot about this, and this is my personal opinion. When I talk to people about this project, I’ll tell this story and a lot of people say “oh, like the music man” or “this is a story of a charlatan.” And I actually think it’s not. I’ve interviewed people who have worked with Barker and who laugh at that and say, “no no no.” He maybe wasn’t the most pleasant of people, but he wasn’t out to delude anybody.

In fact, the term “itinerant” has some very pejorative connotations versus if we flipped it and used the word “independent,” which is very lauded. “Independent” evokes celebrated filmmakers like Richard Linklater, etc. I think you can trace the negative connotation [of itinerant] back to the 19th century or before, to people who didn’t have a place to call home: hobos, gypsies, carnies. The term is used much in Britain pejoratively against certain populations.

Melton Barker was taking local roads going town to town. That does have this connotation of having no place, of being nomadic. But I think he was smart in capitalizing on this idea of Hollywood movies and “wouldn’t it be fun to see your children on screen?” He was a scrappy entrepreneur. During the Depression and the 1940s, he was able to have his own independent production company. You could easily call it independent filmmaking. These are people outside the Hollywood production system, who are interacting with Hollywood in a particular way. There is a lot of winking at the camera for sure. I talked to his former stepson who says he hated kids, which means it must have been for money. But I also think he was very smart about it. We at TAMI did a history camp with elementary-aged children. We did new versions of THE KIDNAPPERS FOIL, and I realized day one that Barker was a genius. He separated out the kids by age and at one point, by gender. We didn’t, and it was chaos.

What political challenges do you face when trying to preserve these films? Does this bad reputation make your efforts harder?

I think it’s the opposite. I think that this idea that “it’s like the music man” gets people more interested. The minute you tell the story, they’re like “Ooh, he was up to no good. Yeah, that’s do this!”

I don’t know what this means for people who like old movies, but I think it’s that we want a good story. Selling him in earnest isn’t a sexy story. A man who drank too much is.

The hardest thing is doing all this research and knowing that so few exist; that is the biggest heartbreak. I just keep hoping that someone will chance upon [things like this interview] and say “Oh, you know, I have a print.” I think in a lot of cases, they’re either misidentified or unidentified. People are like “What is this?” or don’t realize that the talent show [in the second half of THE KIDNAPPERS FOIL] is connected to the first part. I think that is the biggest challenge and frustration: knowing that there are likely more out there and not knowing where and that many are in such poor condition.

I think there’s a correlation between the demise of these prints and the demise of the American movie palace. As independent movie palaces or theaters died off, particularly in small towns, what happened is that once those people shut down those businesses, they threw out everything that was in there, even if they had held onto it for 50 years. Plus, because for the first 20 years or so, at least of Barker’s career, they were on nitrate, people probably threw those prints out because of the fire risk. 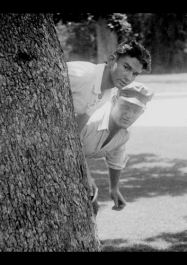 In an article you wrote for The Moving Image, you compared early itinerant films to the early Lumière actualities. How are the two similar?

There’s an analogy with that era of filmmaking because you did have a very robust trend of see-yourself-on-screen. We’re talking about the very beginning of filmmaking in the 1890s. Filmmakers and early exhibitors were usually one and the same and they were trying to get people to come in and see it. It’s like today: you’re trying to get people to adopt a new technology. They would be at a fairground and get people to come in and film something to watch later that day. You see a lot of that in the Mitchell & Kenyon collection, the “come see yourself after you’ve played on the fairground.”

I think there are some parallels there in terms of our impulse to see our community projected on screen. Today people are questioning whether Lumière films are industrial films or home movies. But in terms of attraction and getting people to buy into the filmmaking and film-viewing experience, it all comes down to money. I think there’s a tendency to romanticize these kinds of movies, but I think if Barker were here today, he’d say, “I needed to make money” and the independent movie theaters were trying to compete with the big movie houses, and this is a great way to get people come in. Plus, as a mother, I think these people were geniuses because mothers all want to get their kids out of the house.

What do you think contributed to the decline of itinerant filmmaking?

Definitely technology and the kind of transition that took place throughout the 20th century, particuarly in exhibition practices. In a lot of cities today, we have contemporary iterations of local filmmaking. Like in Austin, we have competitions where people have 24 hours to get a film together. It becomes a stunt. And it was a stunt then.

I think itinerant filmmakers have transitioned from being itinerant or local, to everybody’s YouTube channel. It’s become more domesticated as media viewing comes to the home and technology puts it all on our phone.

Speaking of YouTube, do you see a correlation between Barker’s itinerant filmmaking and companies that will make a YouTube music video for your child like the Rebecca Black’s “Friday”?

There are some interesting analogies to all that. I think what happens in our contemporary world is people saying this is totally happening now because of YouTube. My argument is that this has always been happening; it’s just happening in different modes.

The fact that Barker traveled across the country with 35 mm film and developed it in his hotel room – that’s what made it harder. Now it’s easier with technology. But the impulse has always been around. It must be something inherently human.

You can watch Melton Barker’s THE KIDNAPPERS FOIL in WE’RE IN THE MOVIES: PALACE OF SILENTS & ITINERANT FILMMAKING, now available on Blu-ray/DVD.