What role should film play in the classroom? Are movies a distraction or a tool that can be used to enhance children’s learning experience? These questions that educators grapple with today are anything but new. Take this excerpt from the April 11, 1931 issue of Motion Picture Herald:

For the past two years there has been a growing consciousness among educators everywhere of the important relationship of the sound screen to the class room. Visual education has sprung to the foreground in pedagogic discussions. . . . Motion Picture Herald believes that the time has come when a national campaign for the helpful coordination of school and screen will be important in results. Toward this end, this new department will select the month’s outstanding pictures. It will print brief, authoritative resumes for teachers. This school service will include helpful questionnaires for free distribution in the schools, which the children, after they have seen a recommended picture, should be able to answer intelligently.

One of the first questionnaires published by the Motion Picture Herald’s “School and Screen” department accompanied Berlin, Symphony of a Great City (Berlin, die Symphonie der Grosstadt). Check out this image from the original publication. Full text transcribed below. How well can you answer all the questions? 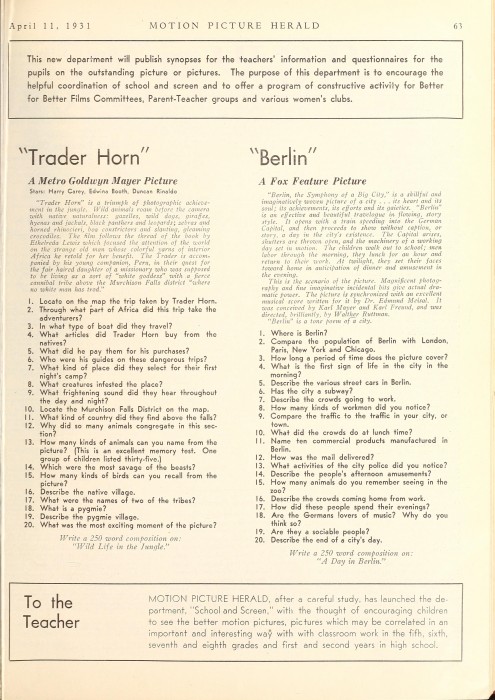 “Berlin, the Symphony of a Big City,” is a skillful and imaginatively woven picture of a city . . . its heart and its sold; its achievements, its efforts and its gaieties. “Berlin” is an effective and beautiful travelogue in flowing, story style. It opens with a train speeding into the German Capital, and then proceeds to show without caption, or story, a day in the city’s existence. The Capital arises, shutters are thrown open, and the machinery of a working day set in motion. The children walk out to school; men labor through the morning, they lunch for an hour and return to their work. At twilight, they set their faces toward home in anticipation of dinner and amusement in the evening.

This is the scenario of the picture. Magnificent photography and fine imaginative incidental bits give actual dramatic power. The picture is synchronized with an excellent musical score written for it by Dr. Edmund Meisal. It was conceived by Karl Mayer and Karl Freund, and was directed, brilliantly, by Walther Ruttman.

“Berlin” is a tone poem of a city.

1. Where is Berlin?
2. Compare the population of Berlin with London, Paris, New York and Chicago.
3. How long a period of time does the picture cover?
4. What is the first sign of life in the city in the morning?
5. Describe the various street cars in Berlin.
6. Has the city a subway?
7. Describe the crowds going to work.
8. How many kinds of workmen did you notice?
9. Compare the traffic to the traffic in your city, or town.
10. What did the crowds do at lunch time?
11. Name ten commercial products manufactured in Berlin.
12. How was the mail delivered?
13. What activities of the city police did you notice?
14. Describe the people’s afternoon amusements?
15. How many animals do you remember seeing in the zoo?
16. Describe the crowds coming home from work.
17. How did these people spend their evenings?
18. Are the Germans lovers of music? Why do you think so?
19. Are they a sociable people?
20. Describe the end of a city’s day.

Berlin, Symphony of a Great City is now available on Manufactured-On-Demand (MOD) DVD.