In this exclusive essay for The Archives blog, Chuck Harter, co-author (with Michael J. Hayde) of “Little Elf: A Celebration of Harry Langdon” explores the life and career of this gifted artist and tells of the odd circumstances that prompted the book’s beginning. 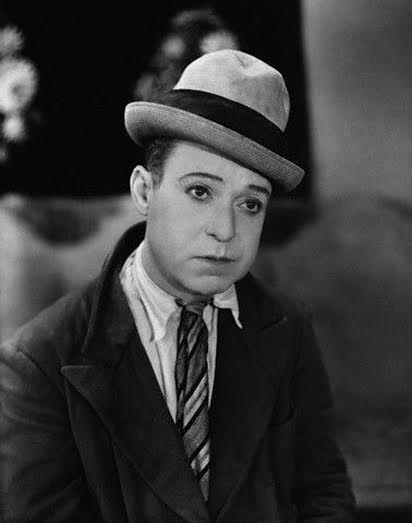 Harry Langdon was a multi-gifted artist whose talents included acting, writing, directing, producing, musical skills and a flair for cartooning. He was a working performer for over 40 years and appeared in every type of show business entertainment from the turn of the century until his death in 1944. He is ranked as one of the four greatest silent film comedians along with Charlie Chaplin, Harold Lloyd and Buster Keaton. Langdon was briefly a superstar of motion pictures in the late 1920’s and continued to be an audience favorite up until the end. His reputation has continued to grow over the years and he is now acknowledged as a master film actor and one of the most unique personalities among the clowns of the screen.

I was first aware of him when I purchased some of his silent two-reel films on Super 8mm in the 1970’s. His performances quickly captivated me and I was astonished at what a weird and quirky presence he was. Langdon’s character was that of an innocent who wandered through his adventures with a bemused outlook on the antics which surrounded him. While his films had their share of humor, many times I wasn’t laughing so much as intrigued by this otherworldly person who was undefinable.  Sometimes he would seem to be a little boy or even an infant and at other times he would become a young man or a middle aged mature figure. This criss-crossing of his apparent ages was very interesting and I really became a lifelong fan. He was also very funny and a master of pantomime.

As film books began to appear in the 1970’s such as The Silent Clowns by Walter Kerr, Langdon had significant coverage and was hailed as a talent that briefly burst forth, then plummeted through his own ego and bad choices of vehicles. Frank Capra wrote many of Langdon’s early short subjects and helped to refine his character for the medium of film. In The Name Above the Title, Capra’s autobiography, he trashes Langdon as a simpleton who didn’t understand his character and, once famous, unintentionally sabotaged his career as a big star by refusing to heed his creative team. Due to Capra’s immense fame and stature as an outstanding director, this view became the gospel and was repeated in many books as time passed. Despite this negative legacy, Langdon’s films continued to be shown at film societies and at venues such as the Silent Movie Theater in Los Angeles and similar movie houses in New York.  Raymond Rohauer, who had rescued Buster Keaton’s films and exhibited them to critical acclaim, also showcased many of the best films of Langdon to similar reactions. 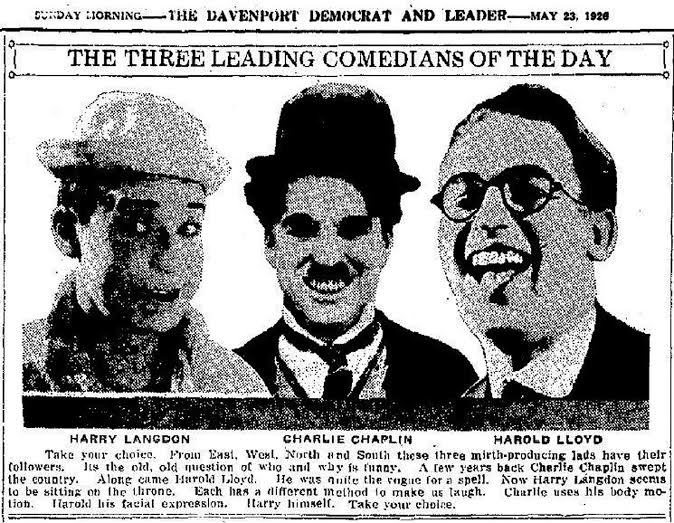 In the 1980’s into the 1990’s several of his silent and talkie shorts were released in various VHS compilations and continued to delight viewers. In the new millennium there were DVD releases of all of his extant silent films with musical accompaniment. His two reel talkie shorts for the Hal Roach Studio which were made in 1929-1930, were exhibited on TV in quality prints. Harry Langdon’s best work in film is available for any who might wish to see an amazingly talented actor and a skilled mime.

Langdon began a show business career as a stage performer at the beginning of the twentieth century. He started with medicine shows then moved to stock companies in which he acted, sang, danced and worked in all the capacities of theatre production. Langdon’s innocent character was in place almost from the beginning and he seems to have been accepted by audiences of the time. In the early teens he began to appear in the vaudeville circuits and was writing his own scripts for his acts. His reputation continued to grow and he was regarded as a competent and reliable performer. By the early teens he had teamed with his new wife and became very popular with an act called “Johnny’s New Car.” Langdon played a chauffeur who has trouble with both his automobile and a girlfriend who enjoys spending his money. This act, written by him, really propelled both Langdons into bigger theaters and eventually Broadway appearances. Langdon was a skilled cartoonist and would draw ads for the act among other assignments. He continued to write new acts both for himself and other performers.

In 1923 Langdon was signed by producer Sol Lesser to appear in comedic two-reel films. A few were made and released to limited acclaim. Lesser then loaned Langdon to Mack Sennett, who had seen him in live performance. Sennett hailed Langdon as a “second Chaplin”. Sennett’s comedy shorts were released with bountiful publicity and very soon Langdon was a huge hit with audiences and distributors. Several critics proclaimed him the “next Chaplin” and Harry Langdon became a star of the movies. 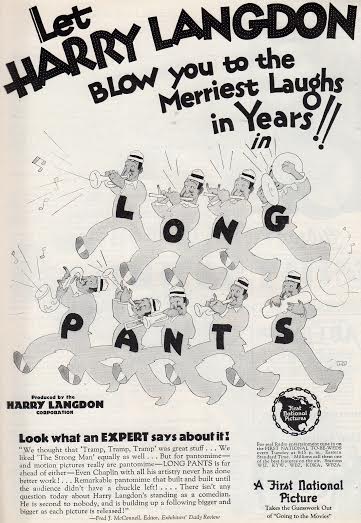 Skilled Sennett personnel such as Director Harry Edwards, writer Arthur Ripley and a young gagman named Frank Capra created a team that really understood Langdon’s somewhat fragile personality and refined his on-screen character. Successful shorts were regularly released and Langdon’s fame increased to being on the same level with Chaplin and Lloyd. Langdon left Sennett for a better offer with First National Pictures and released his initial feature Tramp, Tramp, Tramp. It was a success and a second feature The Strong Man, with Capra now directing, followed to even greater acclaim.

Around this time, Langdon did develop an ego, as did Capra, and on the next film, Long Pants, Capra was fired supposedly for going over budget.  Yet Langdon had already made the decision to direct his own films and it was this, plus time constraints, a possessive and controlling girlfriend and increasing pressure from First National that caused the rift with Capra. Langdon directed his next three features to increasingly bad reviews and lesser box office appeal. He had been a faddish phenomenon and quickly fell from the public’s fancy. By the end of the 1920’s Langdon’s superstar years were over.

Luckily, Langdon was a resilient survivor who performed on the stage to delighted audiences and was soon offered a film contract by the Hal Roach Studio to make talkie sound shorts. Unlike many of his contemporaries who floundered in sound films, Langdon had a voice perfectly suited to his on-screen character. In the early to mid-1930’s he performed in shorts for Roach and Educational Studios. While these were low budget shorts, he was good in them and was welcomed by audiences. Langdon’s various talents ensured that he could always find work. He wrote scripts for others, composed songs and did some live performances.

In the late 1930’s, in part due to his friendship with Stan Laurel, Langdon was back at the Roach Studios and co-wrote some of the Laurel and Hardy feature films. He acted in new shorts for Columbia Studios and had remarried with a young son. Langdon also made some low budget features and was still enjoyed by moviegoers. In the early 1940’s he appeared in shorts, had roles in feature films and was steadily employed doing what he loved to do. While his stardom had certainly dimmed, audiences still responded warmly whenever they saw him on the screen. Langdon literally worked right up until the end and after a day of filming a musical sequence for a film in 1944, felt unwell and died shortly thereafter of a brain hemorrhage. Harry Langdon performed for decades, made many people happy with his talent and truly is one of the great clowns of film. 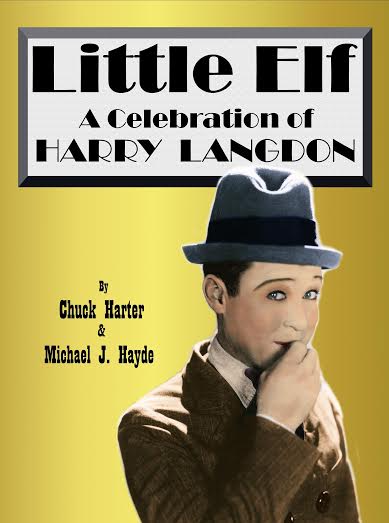 The origin of Little Elf: A Celebration of Harry Langdon began in a very strange manner. One of the nice things about living in the Los Angeles area is that many motion picture performers are buried here; therefore it is possible to visit the gravesites and pay last respects to favored stars. In November of 2010 I decided to go and pay my respects to Harry Langdon. I drove to a cemetery in Glendale on a Sunday afternoon and upon arriving had quite a shock. The front gates were padlocked and when I looked through them I discovered that the cemetery was in disarray. There was overgrown grass and some of the headstones appeared to be broken.  I noticed a sign on the gate which had a phone number to call for information. As I was very puzzled by this odd situation, I called the number and found out the reason for the cemetery’s closure. It seems that a few years earlier the owners of the burial place were discovered doing many illegal procedures. As a result there were several lawsuits and the cemetery was closed. However, due to complaints from people who had relatives interred there, it was open for a few hours on Sundays.

I went back the following Sunday, and with the help of a volunteer, was taken to the mausoleum that contained Langdon’s ashes. We could barely get the door open and the interior was very dirty with cobwebs and debris. There was no electricity but with aid of available light from the windows I found Langdon’s resting place. The faceplate on his area containing the ashes was worn and discolored. After paying my respects, I drove home and thought about this terrible situation. I contacted a long-time friend and fellow author Michael J. Hayde, and informed him as to my tragic discovery. He suggested that we do a blog on Langdon to preserve his memory. We began to do this and then almost simultaneously agreed to collaborate on a book. BearManor Media offered us a contract and we began to work on the tome. As I was in Los Angeles, I spent many hours at the Motion Picture Academy Library and acquired a mountain of material. Michael, based in Northern Virginia, spent a lot of  time at the Library of Congress and also uncovered much information. We both contacted Langdon fans and collectors who very willingly provided wonderful material in the matter of stills, reviews, ads and more. Michael and I were both appreciative and touched by the outpouring of cooperation and over the next year and a half accumulated amazing material.

The result was Little Elf: A Celebration of Harry Langdon released by BearManor Media. This large book contains:

The final result was a massive 689-page book that Michael and I are very proud of.  It was warmly received by many people and our Amazon reviews were most heartwarming.

When I received copies of the book I went back to the cemetery on the next available day and with book in hand again paid my respects to Harry Langdon.

Harry Langdon was a great artist with a very interesting career and life and this can all be found in our BearManor Media release.

Little Elf: A Celebration of Harry Langdon is available in paperback at Amazon.com.

There is a hardback edition which can be found at CoverOut.com.

On the recently released Flicker Alley release THE MACK SENNETT COLLECTION, VOL. ONE (Blu-ray), three of Harry Langdon’s best two reel comedies are featured. Included are His Marriage Wow (1925), Fiddlesticks (1927) and Saturday Afternoon (1926) which features commentary by my co-author. It’s a great set and I highly recommend it.

My personal thanks to Kimberly Bastin at Flicker Alley for the opportunity to say some good things about Harry Langdon and the book.

As a postscript it looks as if the cemetery is being restored to its former good condition.  I’m heartened to know that Harry Langdon’s resting place will receive the same care and attention that has been given to his movie legacy.

Yours in love of Silent Film Comedy,

You can see Harry Langdon’s early shorts in THE MACK SENNETT COLLECTION, VOL. ONE.