Flicker Alley is proud to present the following essay by Silver Screenings, written for Detectives and Dames: A Flicker Alley Noir Blog-a-Thon! Woman on the Run (1950) is available on Blu-ray/DVD May 10! Pre-order today! 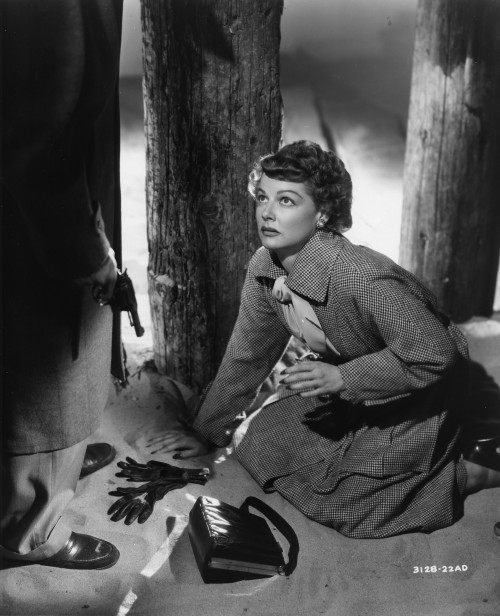 Ann Sheridan has a bad feeling about this.

We just discovered a gem of a film with a truly compelling performance by the oft-underrated Ann Sheridan.

Woman on the Run (1950) is a low-budget but engrossing tale. It’s also an unconventional film noir.

In a typical noir story, a male protagonist is trapped in dangerous circumstances, unable to ask police for help. Adding to his predicament is a menacing hoodlum and a treacherous femme fatale.

But in Woman on the Run, the protagonist is an ordinary woman, trapped in a marriage she no longer recognizes.

Woman on the Run, based on a short story published in 1948 by Sylvia Tait, is essentially a race between police, a killer and Sheridan herself to find her husband. Ross Elliott plays the husband, a man who has the rotten luck of witnessing a murder—then decides to disappear.

When police locate Sheridan to inquire about Elliott, we see a woman with a prickly shell of indifference. Her husband is missing? She shrugs her shoulders: “If he wants to run away, that’s his business.” She seems to know very little about her husband, which the police inspector (Robert Keith) interprets as a reluctance to talk.

Keith: “Please answer the questions. That is, if it doesn’t hurt.”

Sheridan: “Why should it hurt me? It’s all past and done with. If you want to snoop into the remains of our marriage, that’s up to you.”

But when Keith mentions her husband was shot at by the murderer, Sheridan is genuinely shocked. However, she quickly squashes this concern and shrinks back into her What-Do-I-Care demeanor.

Sheridan convincingly alternates between callousness and compassion. When Keith tells her, “I think [your husband] is running away from you,” she orders him, with real anger, to get out. Then, in the next moment, she slips into apathy as easily as one might slip into a sweater. 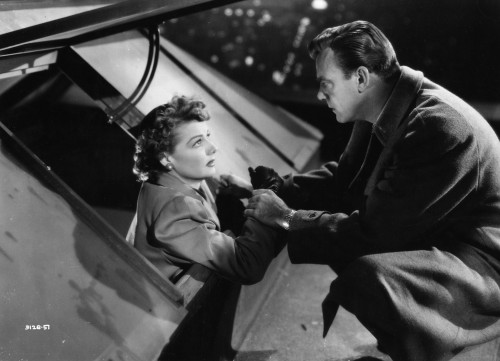 Ann Sheridan and Dennis O’Keefe give police the slip.

Yet, when she meets a reporter (Dennis O’Keefe) casting about for a lucrative story, she begins to relax and becomes a different person. She reminisces about the early days with her husband, and we realize she’s still in love with him.

This, then, is the real mystery: What happened between these two people? How did Sheridan’s character become so hurt and bewildered that she labors at being aloof?

If Sheridan’s marriage were to be a landscape, it would be a murky, chilly swamp, filled with shadows that distort motives.

You could say it’s marriage as film noir. 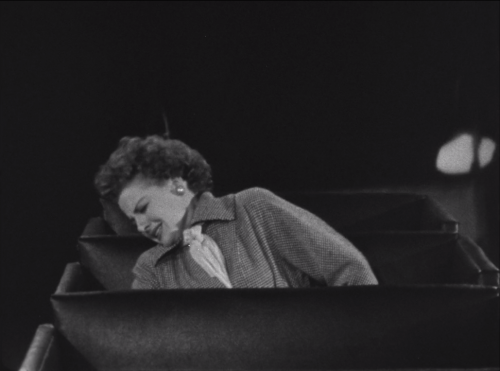 Sheridan on the roller coaster.

We get a glimpse of what Sheridan’s inner world might look like when she goes to an amusement park at night to search for her husband.

It’s one of the best scenes in the film. It’s dark and creepy at the fun park and, while we watch a frantic Sheridan, we hear the thunderous wheels of a roller coaster and the passengers’ screams above her. In other films, a roller coaster is a place of excitement and romance, like the early days of marriage. But not here. The roller coaster trestles loom above her; patrons’ screams mock her. It’s a picture of fear and failure. Welcome to her life.

Sheridan was 35 when Woman on the Run was released. She was enjoying a comeback in the early 1950s, but her film career would not survive the decade. The tragedy is Ann Sheridan had real talent, as this absorbing film proves.